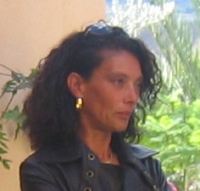 In 1986, she graduated in Classical Letters at the University of Pisa specialising in Archaeology, and discussed her thesis about the Crespellani collection of the Archaeological and Ethnological Museum in Modena. After a PhD course in Classic Antiquities at the Scuola Normale (1988-91), she also received the title of Doctor of Philosophy in Greek History (1997) from the University of Genoa, with a thesis about art thefts, and the spoliation and violation of sacred places in the Greek world. In 1997, she was awarded a PhD grant by the «Fondazione G. Pasquali» (SNS), and in 1998 she was teaching at the «G. Galilei» high school in Pisa. Since 1999, she has been working at the Archaeological Historical Topographic Laboratory of the Ancient World, known today as SAET. There, she kept offering technical and research support. She started her archaeological activities by participating in the first excavation campaigns (1983-1987) in the Roman Villa of San Vincenzino-Cecina (Livorno), under the direction of the Department of Archaeological Sciences of the University of Pisa. She has collaborated in the excavation and cataloguing of archaeological material and in the analysis and organisation of historic and artistic data aimed at developing a computer programme for the management of cultural heritage. Since 1987, she has been involved in excavation works in residential contexts, public buildings, fortifications and funerary areas (dating from the Archaic Age to the Middle Ages) in the Entella sites, in the castle of Calatamauro, in Segesta and Pisa. She participated in a survey project in the territory of the municipality of Contessa Entellina by studying the topography and archaeology of landscape of a period between Late Classical Age and Late Hellenism (her activities included the study of findings and forms of rural populations, and the task of providing a historic and archaeological synthesis). She also participated in museum installations (e.g.: the Antiquarium Museum of Contessa Entellina), in didactic courses within the excavation area (Rocca d’Entella) and in exhibitions (Modena: from its origins to the year one thousand, Modena 1988; From an ancient city in Sicily: the Decrees by the people of Entella and Nakone, Pisa 2001). Among its main interests figures the study of ceramics from Archaic to Hellenistic Age (Ionian and Colonial artefacts, black paint, louteria, common ceramics) linked to the historical, archaeological and topographic reconstruction of their contexts of origin. She is particularly interested in those historical and archaeological issues concerning the colonial world, such as the forms of encounter between Greek and local culture, but also addressed some urban and historical aspects of sacred ideology. She is currently part of the Locris research project.