The diplomacy of the Greek cities

During the Hellenistic period, literary texts, but even more epigraphic sources, show an evolution and intensification in the diplomatic relationships... 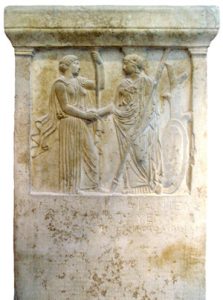 During the Hellenistic period, literary texts, but even more epigraphic sources, show an evolution and intensification in the diplomatic relationships between the Greek cities. The number of treaties documented directly by inscriptions, with an increasingly complex structure, grows, as does the number of honorary decrees, which testify to the merits of the city’s envoys. The different types of envoys that the city used to maintain its relations with the outside world multiplied: ambassadors entrusted with purely political and diplomatic tasks (messengers, presbeutai appointed to sign agreements, interstate arbitrators and mediators), envoys with religious duties (theoroi and sacred envoys in general), and people entrusted with juridical missions (city lawyers in arbitration cases and foreign judges, a new kind of envoy which is attested for the first time at the beginning of the Hellenistic period). At the same time, the vocabulary usually ascribed to the diplomatic sphere expands. On the one hand, each city recognises and develops a communication code which is quickly inclined to become a shared system. On the other, the lexicon describing the ambassador’s sphere of activity develops, with respect both to technical terminology related to his functions and to the vocabulary defining his qualities.

The project developed at the SAET will focus on Greek diplomacy of the Hellenistic and Roman Age from the end of the 4th century BC to the 1st century B.C. under a new perspective. It will start from a specific focus on the envoys, in order to investigate the forms and instruments of international diplomacy, highlighting the continuitiy with the past but also developments and innovations in the period under examination.